Elbow Island Park is, currently, not exactly an island. The Alberta Flood of 2013 swallowed Elbow Island, overflowing Glenmore Dam and filling the side-channel of the island with gravel. This exacerbated a process that had begun already, blocking the island’s secondary stream with debris and creating a rocky, mucky riverbed. 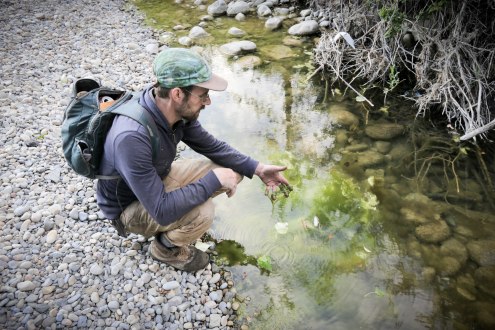 Following the flood, the City of Calgary undertook a number of projects to address flood mitigation, repair and reinforce banks along the Bow and Elbow Rivers. These projects aimed to protect critical infrastructure, but in some cases, had compounding impacts on sensitive fish habitat along the river.

In order to appropriately compensate for the loss of habitat, the City identified a number of sites that could supplement lost habitat at other locations. A project on Elbow Island Park was one of the sites shortlisted.

As part of the Calgary Rivers Morphology Study, the City identified the need for flood mitigation around the Mission Bridge, which involves reducing the amount of gravel and vegetation accumulated around the bridge. According to their research, the vegetation in particular reduces the flow capacity of the bridge, which in turn increases upstream water levels. The Province of Alberta identified the Elbow Island Park side channel as important fish habitat in need of restoration. Subsequently, the ‘Elbow Island Park Gravel Bar Reshaping & Fish Compensation Project’ was born.

This City’s fish habitat and flood mitigation project is currently in the preliminary design phase, with construction expected to start (at the earliest) in Summer 2019. Construction will be strategic to reduce negative environmental impacts, and timed to avoid disrupting important ‘fish windows.’ It will entail:

As part of this project, we’ve been embedded on the design team, learning about the project, keeping abreast of consultations, and meeting with City of Calgary environmentalists and UEP workers.

We saw the profound impact flooding had on Elbow Island first-hand, both during the floods and during the multi-year aftermath. As artists, we’re excited to use this opportunity to ignite a conversation with the river, reflecting on the incredible power of natural processes, and contributing to a communal space for birds, bats, beaver, fish, and curious wanderers.