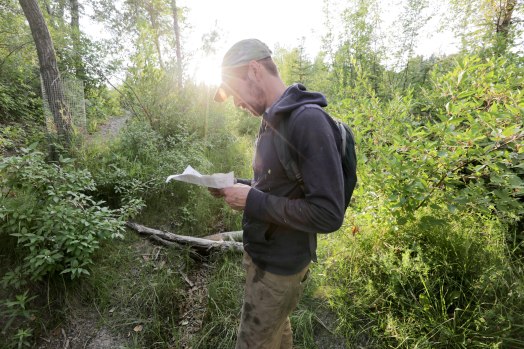 Caitlind graduated from Alberta University of the Arts in 2010, earning an Alumni of Merit award in 2019. Wayne trained as a musician at Mount Royal University and a machinist at Southern Alberta Institute of Technology. Their collaborative works have exhibited nationally and internationally. Closer to home, their public artworks include Yesterday, Today, Tomorrow, AFTER IMAGE, and Delta Garden + The City Unseen in Calgary, CARBON COPY in Edmonton, and LIGHT KEEPER in Toronto. In 2019, they won Urban Design Awards for public artworks in Calgary and Edmonton, including the People’s Choice Award for CARBON COPY. They maintain an experimental art practice in their home, transpiring in weekly winter series The Hibernation Project. Whether exhibiting in domestic settings, formal galleries, pre-demolition buildings, or inner-city islands, Caitlind & Wayne are intrigued by art’s ability to change the everyday through a critical shift in perspective.

Lane Shordee is a scavenger artist based in Calgary, Alberta. Drawing from construction waste and items found by happenstance, he builds elegant  sculptures and installations that both challenge and indulge our relationships with the things we throw away. Lane mines the immediate surplus of materials available, and, informed by his environment, reframes it into cohesive structures, allowing its presumed worth to be re-evaluated.  In the same way the term “scavenger” traditionally holds a derogatory connotation, through new perspective, it can become something of considerable merit and nobility. His process is of an organic and sometimes comical nature that toys with semiotics, functional aesthetics, and happy coincidence – shapes and forms are left to chance or whimsy. It is this playful flexibility that grants each piece an inherent naivety and warm charm. Works begin as sketched schematics which are fleshed out and assembled from objects on hand, objects he can construct, and objects he must seek out. He maintains a steady cache of lost and found objects to be adjudicated and reworked. Embracing shift and impermanence, Lane abides by the notion that we live in a cultural mash-up of ideas rooted to all parts of history – as with memory, each idea becomes new with every attempt to access and re-create it. As such, materials are engaged in a dialogue-of-bricolage, and a collaboration ensues, informed by space, ecology, and the history of the engaged article. Recovered items are respected and regarded as a natural urban resource, and thus reclaimed as artful by-products of by-products – in effect, a dissemination of our individual ideas of consumption and waste.

Ramin Eshraghi-Yazdi is a Calgary/Montreal based Filmmaker. He has directed and produced over 400 projects as the creative director of Nur Films, including everything from experimental art installations and documentary work, to broadcast commercial and music videos, as well as a slew of short films. Inspired by all that is visually stunning and stories not often told, Ramin’s interests vary but his mindset is always tainted with an indie sensibility that favors storytelling. Michael Tan is the eye behind Mike Tan Photo (formerly Diane + Mike Photography) and an all-round cool guy. Mike has a parallel practice as a stage performer, including with Theatre Junction, Vertigo Mystery Theatre, Alberta Theatre Projects, and various independent films, a background that becomes clear when you watch him as a photographer: he’s constantly searching for (and finding) quintessential moments of action + relationship. A “self taught” photographer, he captures images that epitomize moments and freeze them in time for future reference, archive, and understanding.

Kablusiak is an Inuvialuk artist based in Mohkinstsis and holds a BFA from the Alberta University of the Arts. They are represented by Jarvis Hall Gallery, and their work has been acquired by public and private collections across so-called Canada. Awards include the Alberta Foundation for the Arts Young Artist Prize (2017),  the Primary Colours Emerging Artist Award (2018), and short-list nominee for the Sobey Art Awards (2019). The lighthearted nature of their practice extends gestures of empathy and solidarity; these interests invite reconsideration of the perceptions of contemporary Indigeneity.

Specializing in Sculpture and New Media Sean Procyk and Jeremy Pavka have an interdisciplinary collaborative practice focusing on immersive public engagement. Their projects respond to a regional context with a particular focus on the relationships that exist between landscape, community, and ecology. Often using comedic tropes, the two create site-specific projects that aim to enrich the collective sense of place. Their expertise includes architectural fabrication, landscape construction, and digital technologies including film and media.

Sean holds a degree in Fine Arts from the Dundas Valley School of Art, a Bachelor of Architecture from Carleton University and a Master’s of Fine Arts from OCAD University. He teaches in the experience design program at Sheridan College.

Michael Hosaluk is recognized internationally and in Canada as one of the world’s most creative wood “turners”. Born in 1954, in Invermay, Saskatchewan, Hosaluk is self-taught. Hosaluk’s work covers a wide range of objects and materials including  functional vessels, furniture and sculptural pieces. His work is humorous and elegant, possesses character and gesture and is full of reference to architecture, nature and culture. Hosaluk’s work has been exhibited throughout Canada, Great Britain,  Europe, China, Japan, Australia and the United States. Hosaluk’s pieces can be found in the permanent collections of Her Majesty Queen Elizabeth II, Buckingham Palace, Idemitsu Corporation, Tokyo; Boston Museum of Fine Art, Los Angeles County Museum of Art; The Detroit Institute of Arts; Yale University Art Gallery; Minneapolis Institute of Art and the Royal Ontario Museum. Hosaluk is a member of the Royal Academy of Art and Honorary Lifetime member of the Saskatchewan Craft Council. He received the Saidye Bronfman Award for Excellence in Craft in 2006 and the Lieutenant Governor General Award for Lifetime Achievement in 2011. He has lectured and demonstrated extensively throughout Canada, the United States, Australia, New Zealand, Great Britain, France, Norway and Israel. In Hosaluk was the founder of the biennial International Emma Lake Collaboration which  started in 1994 and is the model for numerous collaborative conferences worldwide. His connections to the global creative community gives him an eclectic palette of talent to curate unique exhibitions of art and craft. Michael Hosaluk lives and has his studio near Saskatoon, Saskatchewan and remains active locally and globally.

Laura Hosaluk is an interdisciplinary artist living in Saskatoon. Her creative practice is colorful, energetic, and optimistic, spanning from painting, ceramics, found objects, and land art. She is passionate about collaboration as her arts education is a bi-product of that learning. In 1992, at the age of nine, she began participating in the EMMA International Collaboration. An innovative hands-on experience encouraging students to go beyond their usual art practice and explore medium, technique and subject matter, in an environment free of pre-determined outcomes. She continued her education with EMMA in 2010, stepping into the role of Lead Organizer. This educational model has deeply inﬂuenced her to create something that is truly “ours” rather than “mine” through inspiring community process driven work that creates positive social change, inviting viewer to connect with nature and its environment. Hosaluk’s work exhibited at the Sala Rekalde in Bilbao, Spain and the Blackall Studios in London, UK. Slate Fine Arts Gallery in Regina, SK represents her work. 2016, she was invited to MIT in Boston, MA, to take part in a talk ‘Creativity in the World’, expanding on the collaborative model in teaching practices. She has served as board member at the Saskatchewan Craft Council. 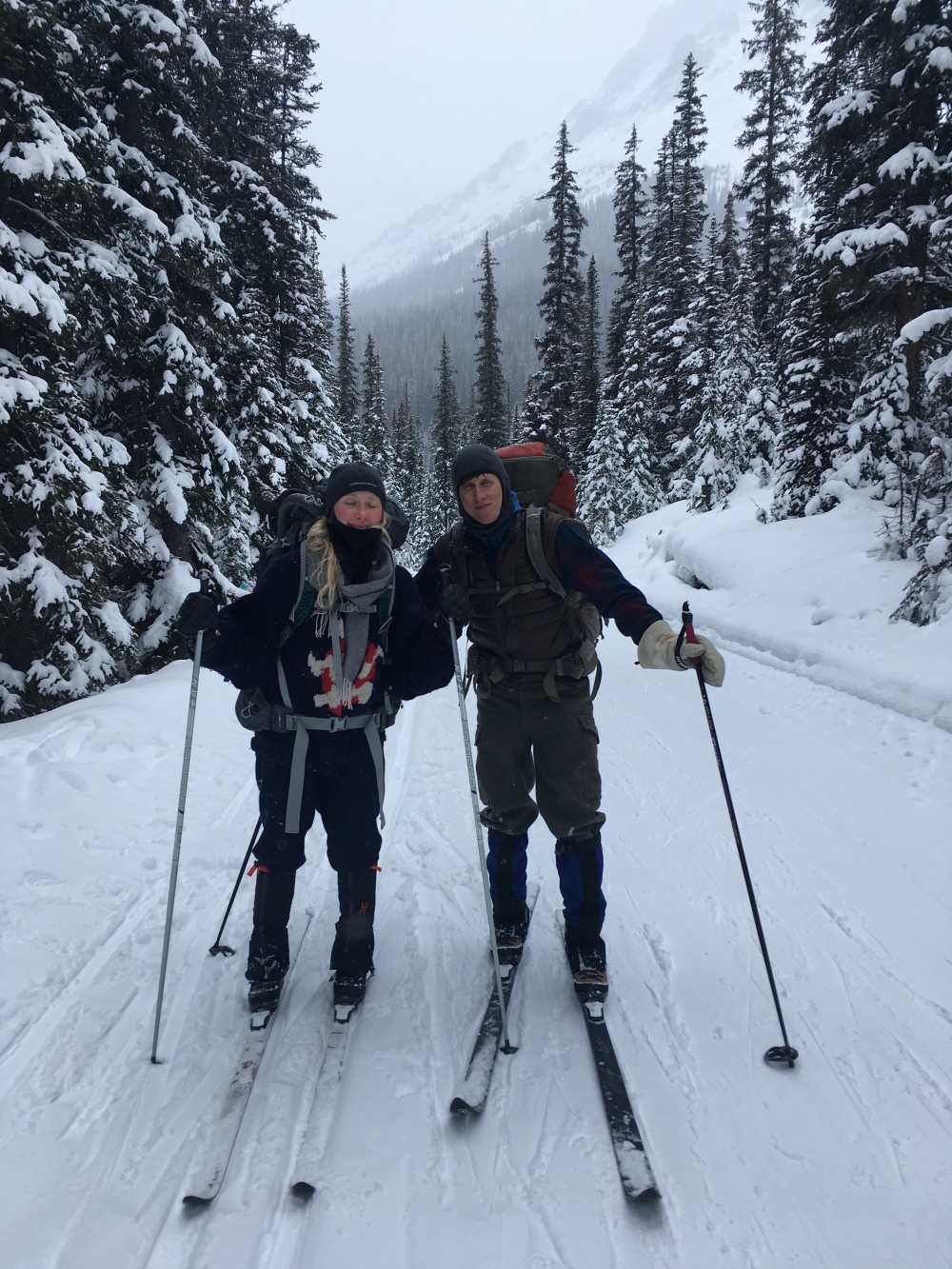 Susan Clarahan and Joel Staples are visual artists who work and live in the Rocky Mountains, they are both focused on developing deep, personal relationships with the landscapes they live in, and their artistic practices reflect this. Susan’s work is focused on creating intimate adventures in wild landscapes, and documenting them with analogue photography. Joel is a sculptor and carpenter who examines the relationship between labour and landscape in craft.

Together, Susan and Joel built a bench that allows for stargazing and sunbathing; soaking up the sunshine by the river, and gazing at the moon on freezing winter nights.